In the movie Bedazzled, Elliot, a hopeless romantic played by Brendan Fraser, has a pretty sad life; he works 9-5 in a cubical, he is socially awkward, and he has no chance of being with the girl of his dreams. However, his luck changes when he meets a beautiful woman in a bar who claims to be the Devil. The Devil, played by Elizabeth Hurley, offers Elliot a deal; in exchange for his soul, she promises Elliot that she will grant him seven wishes. After lots of persuasion and little deliberation, Elliot signs over his soul. Throughout the movie, the Devil grants Elliot whatever he wishes, but there's always a catch. For instance, one of Elliot's wishes is to be the richest and most powerful man in the world -- she turns him into a Colombian drug lord. This string of trickery goes on and on until Elliot lands himself in jail. There he tells his cell mate that he signed his soul over to the Devil. But his cell mate, who eludes to being God, tells Elliot that he couldn't have given it away because his soul belongs to God. Then Elliot confronts the Devil, stands up for himself, meets a girl, and lives happily ever after. 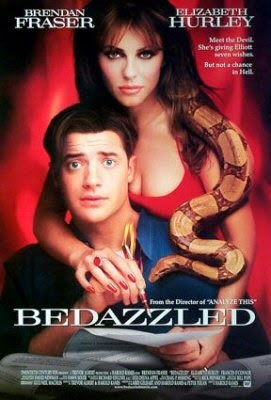 This is just one example of the classic "signing over one's soul to the Devil" story. However, this story line is not a new concept. The idea of making deals with the Devil dates clear back to medieval times. The original deal with the devil is presented in the story "Theophilus." An archdeacon, Tiofle, is not pleased with his life. He wants to be known throughout the land, and from what I understand, he wants to move up in the church. While wallowing in self pity, a Jew comes along and tells him that all his dreams can come true so long he sells his soul to the Devil. Tiofle listens to the Jew, and using his own blood, he signs his soul over to the Prince of Darkness. Time passes, and Tiofle realizes that giving his soul to Satan probably wasn't the best idea. So Tiofle prays to Mother Mary; he repents and asks for Her help to get his soul back. Mother Mary agrees to help him as long as he keeps God in his heart, and they go visit Satan. Mary reminds Satan that Tiofle's soul was never his to give away because his soul belongs to God. The contract is therefore voided, and Triofle lives happily ever after. Although the catalysts in Bedazzled  and "Theophilus" are different according to the time periods in which they were written, they mirror each other's basic plot and themes. The morals of both stories are the same: deals with the Devil never turn out well, God will come to the rescue (in some way, shape, or form), and one's soul is not one's to give.

(Besides making a deal with Satan, there are more medieval themes that appear in Bedazzled. For example, the Devil in this movie is portrayed as a woman. During medieval times, women were thought of as evil, disgusting, and everything a man did not want to be. Because of this disgust and mistrust, I'm surprised the Devil wasn't portrayed as a woman more frequently during medieval times.
Furthermore, there is a snake depicted throughout Bedazzled. Back then (and still today), snakes were associated with evil.)