The cult of the Virgin Mary in the Middle Ages seems incredibly out of place. This was a time where women were thought to be disgusting, dirty and even evil. But where Christians were trying to keep themselves separate and pure from their Jewish neighbors Mary came in as a mediator and saving grace. She did this both by saving said Christians from the Jews and by allowing these Jews a way of conversion. As the stories like “The Prioress’ Tale” and “The Child Slain by Jews” go, the Jews would kill a Christian child, a boy, and Mary would come to save him for his honor of her - with her seed or flower placed in his mouth/throat. But why Mary and not Jesus, a man and savior to the Christians? The answer lies in the contradiction that Mary is. She is a Virgin Mother. She saves the Christian boy by both seed and flower - male and female. She gives birth only to give her son to death. But most importantly she is saving and condemning, together. These stories end in the saving of Christians from their Jewish neighbors, but the young boy still dies, and more importantly the Jewish murderers are all put to death. 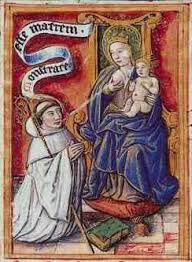 But this is not unique to the Middle Ages - let's look at Our Lady of Guadalupe, who gave Saint Juan Diego roses in bloom in the middle of the winter. The context she first appeared in at Guadalupe was very similar to the one in the Middle Ages. The Spanish Catholic conquest of Mexico was "threatened" by the indigenous Aztec population. With the violence of this conquest the Aztecs planned to revolt against and kill the Spaniards and this is where Mary comes in. By appearing to Juan Diego, a native of the land, adorned with Aztec symbolism and speaking to him in his native tongue Nahuatl while also charging him with the building a church on a hill northwest of Mexico City where she appeared to him, her goal was to convey her presence amount the local indigenous people. Her visitations had the effect of converting almost the entire Aztec population to Christianity - effectively ridding the Christians of the threat of pagans and spreading the faith. But, because of her appearance during her visitations the indigenous people of Mexico claimed her as their own as well – seeing themselves in her dark skin and eyes. And so she constructed a blended and new identity for the Mexican people. 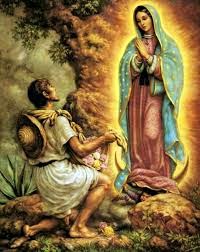 This veneration of Mary has since spread to the United States with immigrants from Mexico. We find her especially in Los Angeles – on bumper stickers, hanging from rear-view mirrors, in street art and most notably on the arms, chests and backs of Hispanic gangsters. She has somehow moved from representing just conservative Christians to now also artists and gangsters. The tattoos of the Virgin Mary of Guadalupe on a gangster’s skin slow him to be both holy and dangerous, a sinner and saint. She, as a grace giving mother, becomes a sort of home for those who are out of place. Her darker skin color, while depicted in America, gives a home and voice to those outside the majority. And once she is imprinted on the skin she becomes, not only a necessary means of gang identification but also shows the compassion she stands for, because these gangs are often the only place where these Mexican immigrants have a sense of belonging. 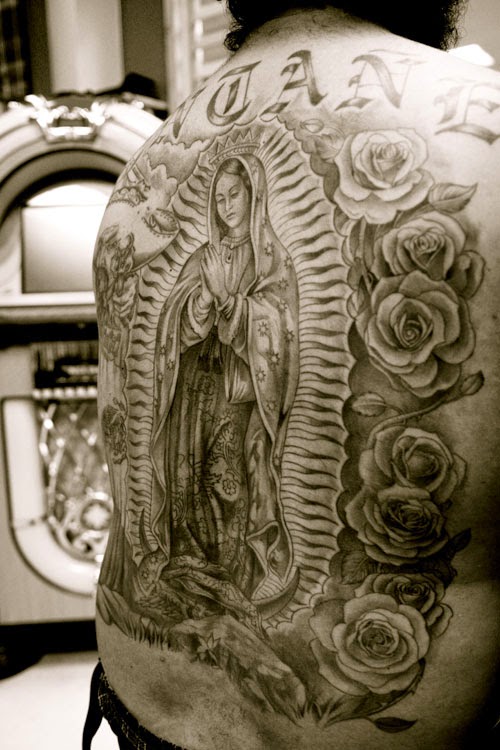 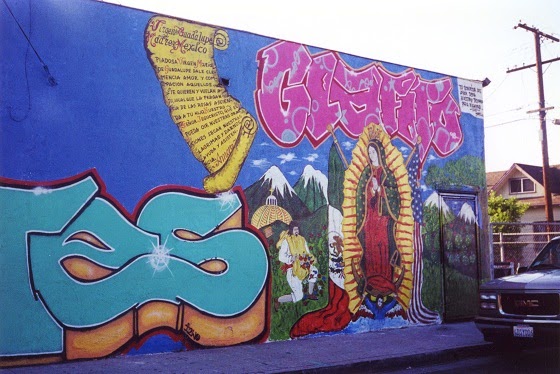 Her power and popularity seems to come in her ability to mediate contradictions - she can be a saving grace, a converting force while not condemning some pretty horrendous acts - whether it be persecution of Jews or gang violence. It seems as though, while Mary can represent some wonderful things and at times be a connection between disparate cultures and religions (think of the way the Islamic faith venerates Mary) she can also be used to forward a cultures own agenda.