“The King of Tars” discusses a fear many English medieval people had: what would happen if a baby were born from parents of two different races? The kid will be a blob, apparently. It’s easy to dismiss this story as classic, crazy medieval fears. Silly medieval people, of course a mixed race baby would be born healthy and normal.
The fear, misunderstanding, and ignorance of multiracial people persists today, however. It was only as late as 2000 that “two or more races” was added as an option on the US census. Prior to that, the estimated 6.8 million people who identified as multiracial were forced to pick a “side” of their race, or put down some other race. The concept of “picking a side” of one’s race can be traced back to when “The King of Tars” was written, and it still exists ten years later, even with the added option on the Census. Infamous/famous golfer Tiger Woods is considered Black by the public and the media, but he is in fact a mix of White, Black, Asian and Native American. As a society today, we experience the same unease as medieval people when faced with multi-racial people; we just deal with it by forcing labels on people, instead of pretending (for the most part) they don’t exist.
The confusion towards multiracial people and interracial relationships seen in the medieval period is still very real and relevant today. In 2013, Buzzfeed presented a video called “16 Things You Should Never Say To Mixed Race People.”
https://www.youtube.com/watch?v=mqHf9ZayI8Y
Many of the “things you should never say” are questions based off of confusion: what are you? What are your parents? Who do you date? Much like “The King of Tars” forces the biracial baby to pick a side (and the right side was White) the questions in this video are asking multiracial people to pick a side, to choose a race to identify as. After all, if you don’t pick a side what are you? “The King of Tars” offers an extreme example of being nothing but a lump baby, but even today we still have the mindset that being biracial or multiracial is not a real race; you must pick a race in order to have an identity.
This confusion and lack of a “real identity” can sometimes turn into anger, as seen with a Cheerio’s commercial released during the 2014 SuperBowl. The commercial featured a White mother, a Black father, a biracial child, and the importance of eating Cheerios. Nothing special or shocking. The initial reactions to the video on YouTube, however, were confusion, anger and disgust, to the point where Cheerio’s temporarily closed the comments sections because of the threatening and racist messages people were sending (the comments have now been reopened). 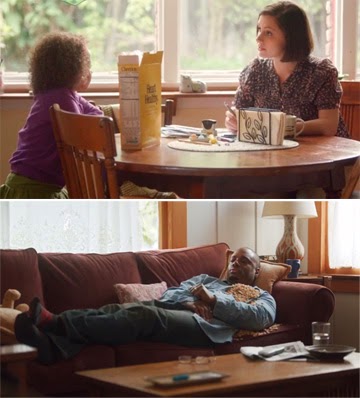 http://www.huffingtonpost.com/2013/05/31/cheerios-commercial-racist-backlash_n_3363507.html
Centuries have passed since “The King of Tars” was written, but interracial relationships and multiracial people still get the same reaction: what? How? Why? Like in medieval England, people are still dismayed by the existence of multiracial people, partially because of the persistent belief in some places that race is somehow biological. People may be threatened by mixed-race people, they feel anger, they may feel confusion, but no matter how people are feeling, the end result is that a mixed-race person must “pick a side” of their race because a mixture of races is neither okay nor a real identity. “The King of Tars” may seem like ancient example of people’s views on mixed-race children, but it doesn’t seem so out of reach when death threats and violence are the kind of reactions you get to a cereal commercial.
Posted by Unknown at 9:04 PM