A Brief History of Amazon Women

The Amazon women are originally found in Greek myth as a representation of wild, dark, feminine forces that need to be tamed by male civilization.  Typically portrayed as (sometimes promiscuous, sometimes virginal) women instilled with a hatred of men and marriage, they represented a kind of gender deviance that was “othered” in order to define the sexual morality and identities of Athenian women.  Derived from the Greek “a-mazos” meaning “without a breast”, implying a lack of maternal instinct or interest, their male offspring were commonly emasculated, crippled, killed, or sent away—a rejection of maleness that opposed the pervasive Greek desire for legitimate male heirs.  Archaic male authors wrote of
the Amazon women for centuries, highlighting Greek anxieties regarding the power and temptations of femininity.  The Amazons could be fearsome rivals or essential allies, but they ultimately existed to be tamed by love or war; a neutralized threat. 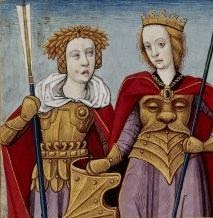 Sir John Mandeville’s Amazons were perhaps a bit more sympathetic to a contemporary audience, but were cultural Others nonetheless.  Their rejection of male children echoes the practices of their ancient predecessors; the mutilation of their bodies—the amputation of a single breast—could represent a contrasting rejection of femininity, placing them in a gender grey-area which allows them to exist beyond (or perhaps somewhere in between) the medieval virgin/whore dichotomy.  We later see them as necessary guardians of Alexander’s gate, keeping the Jewish population physically isolated from the Christian world—
until the prophesized “end of times”, during which they are doomed to fail.  Although this incarnation of Amazonians serves a functional societal purpose, they are not fully integrated into any aspect of “normal” society, and will eventually be ineffectual.  Thriving under a matriarchal democracy that rejects any notion of patriarchal monarchy, these women exist in a liminal space, simultaneously empowered by their freely-existing femininity but nevertheless subject to the perspectives and desires of Christian hegemony.


Like her ancient and medieval counterparts, Wonder Woman—Princess Diana of Themyscria—is an
Amazonian character created by a male author in order to establish boundaries or guidelines for the behavior of women.  American psychologist William Moulton Marston created Wonder Woman as “psychological propaganda for the new type of woman who should, I believe, rule the world.”  This proto-feminist notion is, like historical portrayals of Amazon women, complicated by social ambivalence; Marston’s Wonder Woman is a simultaneously empowering and limiting figure , encouraging women to be strong like Diana whilst eliminating from their aspirations any value that she does not stand for.  Marston's motives in Diana's creation complicate her existence as a feminist icon, despite the fact that she is a truly admirable and complex character.


Ultimately, the pervasive presence of these Amazonian figures throughout literary history illustrates the symbiotic relationship between mythology and culture; by systematically creating and portraying atypical characters, authors have the power to establish (sometimes problematic) guidelines for the behavior of society at large.