Evolution of the Fox Image: Jews and Foxes are in it together

In The Travels of Sir John Mandeville it is foretold that a fox will lead the Jewish tribes of Gogh and Magog out of their confinement behind the Gates of Alexander. Interestingly, the fox and Jews had a lot in common in the eyes of Medieval writers. 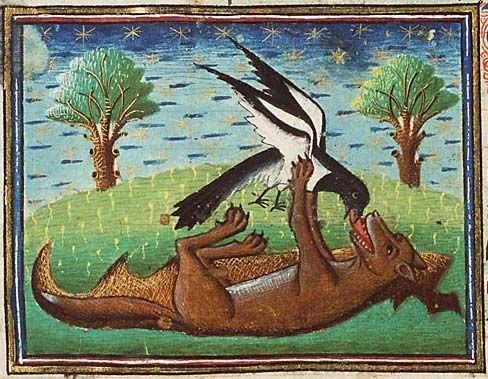 The fox stood for trickery and deceit. This assumption was derived from its hunting style, which involved it pretending to be dead by covering itself in red mud. It then waited for birds to descend upon it to snatch them out of the air and kill them. This tactic seems much like that of the Jews we have seen in other readings. For example, in "The Miracle of the Boy Singer," the Jewish murderer lures the boy singer into his home to kill him by pretending to be nice to the child. This habit of lying that leads to murder seen in both the Jews and the fox can be connected to their association with the devil.

Medieval foxes were directly representative of the devil in their hunting style. The devil is said to have pretended to be dead to people who were questioning their faith. Then when he had them in his reach he would snatch them away. To true believers the devil is always supposed to be dead. Medieval Christian portrayals of Jews after most of the Jews had already left the area seem to be saying the same thing: don't forgot about Jewish evil.

Mandeville's tales seem to be backing this notion up by mentioning the ten Jewish tribes locked away in the Amazon. By leading the Jews out of the mountains with a fox he is also asserting their connection to the devil, making them almost as if they were the people of the devil. Mandeville's portrayal of Jews suggests that they will be rewarded by the fox and take part in the end of the world. This tale is directed at Christians to instill fear. 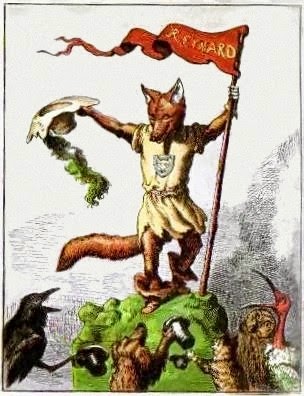 In contrast, a more recent depiction of the fox's relationship to Jews is meant to instill fear in Jews and hatred in Christians. This is the tale of Van den vos Reynaerde, an anti-Semitic tale taken from the Medieval "Reynard the Fox." Reynard, a traditionally trickster-hero, is presented in this tale as a genocidal champion over the rhinoceroses, which with their long horned noses represented Jews.

It is interesting to see how the Jews' relationship with the fox has changed over time. It shows either way a strong connection to evil and the devil, which has made them easy targets for
Christian hatred
Posted by Unknown at 8:15 AM