Over the course of the semester, we have reiterated time and time again that a multitude of media we see today is influenced by medieval literature.  From the connection a hero has with their weapon, to racial depictions of other races, to religious organizational structure (as seen in A Song of Ice and Fire), medieval culture’s impact remains on our video games, comics, novels, TV, and films.  However, in noting the various connections between the medieval period and narrative works today, we have ignored one of the most notable past times of the modern era.  While Gary Gygax’s Dungeon’s and Dragon’s borrows heavily from a variety of different works in the fantasy genre, many of the monstrous races seen in works that we have read are directly represented within the most famous role playing game of all time. 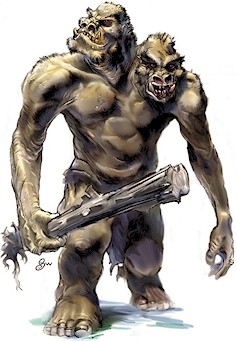 One unique monster is the Ettin.  The Ettin is a giant like creature with two heads, each of which is capable of independent thought, and each controls one arm for attacking. The left head directs the left arm and right head directs the right arm during combat. The two heads disagree constantly, but will work together when there is a common threat.  On the scale of morality, they are chaotic evil.  While the two headed nature of the giant is not something we have seen (so far) in our class, we have seen several instances of giants present, such as Arthur’s encounter with the giants who collected beards.  The ettin is physically empowering and pure evil.  His function as chaotic evil and powerful stature is similar to the article “Of giants sex monsters and the middle ages”, where defeating such a worthy opponent gives the characters (or in this case players) a sense of triumph and accomplishment.

Another medieval monster that is found in the game is the Tarrasque, a dragon with a lion's head, six short legs like a bear's, an ox-like body covered with a turtle shell, and a scaly tail that ended in a scorpion's sting . While we have not read the story in this class, its themes are similar to other Christain converting tales we have read, such as The King of Tars.  According to legend, the king of Nerluc had attacked the Tarasque with knights and catapults, but it had no effect.  Saint Martha found the beast and charmed it with hymns and prayers instead of attacking it, and led the tamed Tarasque to the city. The people, terrified by the monster, attacked it when it came close to them. The monster offered no resistance and died there. Martha then preached to the people and converted many of them to Christianity.  The townspeople then changed the name of the town to Tarascon.  In Dungeons and Dragons, the game respects this history, stating that “The tarrasque can be slain only by raising its nonlethal damage total to its full normal hit points +10 (or 868 hit points) and using a wish or miracle spell to keep it dead.”  Essentially, the only way to kill the tarrasque is by calling to a divinity, just as Saint Martha called to her Christian god.

One of the great things about Dungeons and Dragons are the rich influences of its source material.  From Giants to Tarrasque’s, from swords to practices of the time period, the game functions as an interesting modern look on a time period that existed a long time ago.
Posted by John Campbell at 3:02 PM