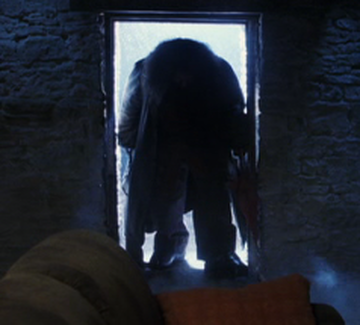 so that the regular characters can gasp and tremble at the sheer size of the beast, and  turn to run or gather their weapons to fight. However, surprise surprise!

They're actually sweethearts. Usually, the gentle giant is the heart of whatever ragtag crew they adopt. Sweet and loving and sometimes not terribly smart, they usually have a childlike sense of wonder and faith and are loyal to the death to their friends. They also often have a connection to nature and a deep desire for peace. The trope is so prevalent that it's surprising when a contemporary character played as a looming, menacing thug doesn't turn out to be a sweet little kid on the inside.
This is a reversal of a common-sense social judgment (hey, that guy looks like my nightmares, better keep away just to be safe) that first seems to have occurred with Mary Shelley's Frankenstein. The monster in Frankenstein proves himself to be capable of reason and mercy, and takes care of things that are weaker than him, in contrast to Dr. Frankenstein himself, who becomes more monstrous and maddened by fear as the story goes on. This reversal (Hey! This guy looks bad, but get this, he's actually good!) must have at one point been a refreshing concept. Now, it's a trope of its own.
However, before Shelley's time, the usual perception of a giant was as a brutal, filthy, stupid creature. While that trope itself is still in use:

it apparently had its heyday throughout Western history. The giant was portrayed as a monstrous creature that lived far from civilization and often engaged in wild cruelty and sexual depravity. The giant was the antithesis of civilization: the savage holdouts in the forests and mountains who went against the encroaching sophisticated Roman culture, choosing instead to rely on the natural world instead of engaging with what was rapidly becoming 'Christendom.'
But how did we get from here:

Certain elements of the medieval perception of giants might point to a link.Giants were portrayed as brutal creatures, true, but there were also elements of the fantastic to them. Their loves and appetites were outsize, matching their bodies. People with giant's blood often loved greatly, sacrificing themselves for their friends. In addition, the giant often seemed to have a spiritual connection with nature that spoke to a purity of spirit, which the 'civilized' man had traded for roads and books and laws. There might actually be a historical basis for this perception the mention of 'giants' might actually refer to the presence of Celt natives, who would have held on to a nature-based culture and seemed like savages to the Roman settlers. Gentle Giants in contemporary culture also sometimes retain this natural connection:

playing into tropes that have lasted hundreds of years. This archetype of the big, lovable, sensitive, nature-and-peace-oriented giant who uses his brawn to protect and not to hurt may be a character that has morphed along with Western culture for centuries, transforming as we define and redefine our own culture, to accordingly become benign counterculture figures. Since the Industrial Revolution, our own estrangement from nature and from a gentle, simple mindset may have shaped our perception of the giant 'other' into a trusting, sweet, and loyal denizen of the natural world. In medieval times, nature was much more of a threat to civilization, and the veneer of a sophisticated European culture was dangerously thin, so giants may have been represented as much more threatening, wild, and transgressive, as a warning against becoming a wild, nature-reliant 'other,' which would have been a much more realistic possibility at that time than it is now.
Posted by Unknown at 7:14 PM