Getting Freaky With Medieval Literature

To begin, Sir John Mandeville tells of the land of the Amazons, which is solely inhabited by women. He describes the Amazons as "...noble and wise warriors...." who are respected by men (neighboring kings) and who are valuable warriors. In American Horror Story: Freak Show, there is a character by the name of Amazon Eve, who is also somewhat of a noble warrior on the show. Much like the Amazons described by Mandeville, Amazon Eve is respected by her comrades; even though she is a woman, she offers protection and aids in fickle situations. She also offers motherly affection to some of her fellow freaks, which is similar to the Amazons- even though they possessed manly qualities, they still raised children (female ones, anyway).

"There are many different kinds of people in these isles. In one, there is a race of great stature, like giants, foul and horrible to look at; they have one eye only, in the middle of their foreheads. They eat raw flesh and raw fish..." This quote from Mandeville begins his descriptions of the "monsters" he comes in contact with throughout his travels. The description given depicts similar aspects of the character Meep in American Horror Story: Freak Show. For instance, Meep is known on the show for biting off animal heads, which coincides with Mandeville saying the monsters he saw "eat raw flesh and raw fish." Furthermore, his grotesque teeth and slightly abnormal physical features made him "foul and horrible to look at."

"In another there are people of small stature, like dwarfs, a little bigger than pygmies..." Ma Petite in American Horror Story: Freak Show is a tiny dwarf woman. The tiny people Mandeville described seemed a little more terrifying, for he says they hissed and had a hole for a mouth. Ma Petite's character is actually very charming and sweet, but she is viewed as abject because of her small size. 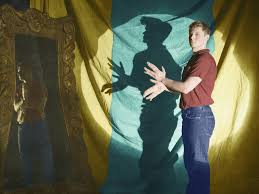 "In another isle there are people whose ears are so big that they hang down to their feet like four-footed beasts..." Although there are no characters with huge ears in American Horror Story: Freak Show, there are characters who have excessive body parts. Jimmy (depicted top right) is known as Lobster Boy, for his fingers are fused together, giving them the appearance of lobster claws.
The picture to the left shows Bette and Dot. They are considered freaks because they are Siamese sisters who share a body, or rather their body has two heads.
Paul, who is shown in the bottom picture at the right, has deformed arms and fingers that resemble flippers, or webbed feet. 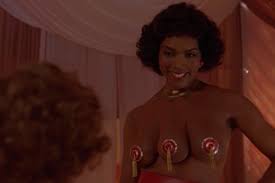 "There is another isle where the people are hermaphrodite,
having the parts of each sex, and each has a breast on one side..." When this character is first met, Desiree claims to be a hermaphrodite. Desiree does not have a single breast on each side like the hermaphrodites Mandeville described, but she does in fact have an extra breast. So, not only is she abject because she is considered both male and female (until she found out that her "penis" was just an abnormal looking clitoris), but her extra breast makes her sexually excessive.


Many more characters in American Horror Story: Freak Show can also be related to characters in The Travels of Sir John Mandeville. The comparisons and resemblances between the two exemplify that qualities viewed as abject in the Middle Ages are still viewed as abject today. Abnormalities, mostly in appearance, are considered fascinating, horrifying, and entertaining, which is why characters such as dwarf people or Amazons were the topics in literature back then and are still the topics in popular culture today.
Posted by Unknown at 7:48 PM