Our class has been learning and talking about many different types of mythical creatures that have appeared in various medieval texts. One of those creatures is the unicorn. Depictions of unicorns can be seen in a multitude of medieval artwork.
One of the most common associations with unicorns was Jesus Christ. The unicorn's horn was used as a symbol of Christ's closeness to God and their unity. Unicorns were seen as pure creatures, illustrating the purity and spiritual invincibility of Christ. The unicorn's fierce wildness was said to represent hell's inability to hold Christ. Among the watermarks found in the vernacular Bibles written on paper manufactured in small paper mills throughout the “Languedoc,” unicorns are the most popular of the images. Of approximately 13,000 watermarks collected in the early 20th century from antique bibles and other medieval literary works (notably the "Romance of the Rose" and "Song of Roland'), nearly 10% are images of unicorns.
It is said that a unicorn can only be tamed by a virgin woman. The unicorn was drawn to their purity. Some accounts say the girl must bare her breast and allow the unicorn to suckle. 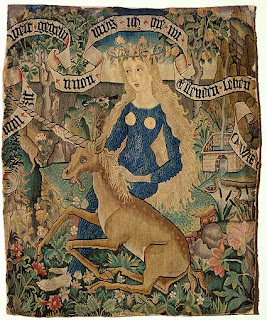 In this picture, the woman is wearing blue, a color commonly associated with the virgin Mary. Her breasts are also exposed, reinforcing the mythology that the unicorn would come to suckle on the woman. This acts seems to attempt to create a relationship between the woman and the unicorn similar to the relationship between a woman and her child. This reflects the relationship between Christ babe and the virgin Mary.
The horn of the unicorn, which is a distinctly phallic object, is said to purify water, counteract poison and cure diseases.  Turning the unicorn's horn into an objects of purity seems to directly conflict with the overt sexuality of it. This could have been a reflections of societal anxieties at the time.  People at the time had hard time grappling with the concept that Christ was born of human woman. The could not conceive of the fact that the physical form of the God had passed through a woman's vagina. At the time this was considered one of the most disgusting places on a human body. These anxieties led to the belief that Jesus actually passed through Mary without breaking her hymen. The mythology of the unicorn and much of the artwork that depicted unicorns at the time seemed to be actively trying to maintain the purity of Mary and her relationship with Christ. 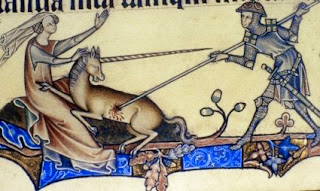 This image of a man wounding a unicorn in the side with his spear is directly related to Christ's death on the cross. While dying, he is pierced on the side by a spear. 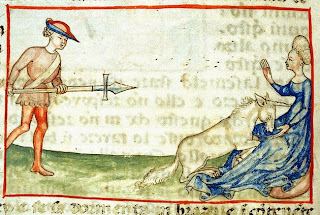 This woman is again wearing blue which refers to the virgin Mary. She is also in a position to try and protect the unicorn.  These images seem to directly relate to Mary's anguish with Christ's death on the cross.